Breviarium Meum: for the iPhone and iPod touch

Breviarium Meum allows you to pray the traditional (1962) Latin breviary of the Catholic Church wherever you go. Just pull out your iPhone, iPod touch, or iPad, select the hour to pray, and begin. You can download the texts up to a week in advance, so you can pray even when you don't have a network connection. So if you’re on a mountain top making a retreat, or down in a valley to celebrate Mass in an isolated village, you can still keep up with the office, even if you left your printed breviary at home.

Are you unfamiliar with the old breviary? It’s a part of your heritage, and one that you have a right to know about and experience. As the instruction Universae Ecclesiae reaffirms, one goal of the motu proprio Summorum Pontificum was to offer “to all the faithful the Roman Liturgy in the Usus Antiquior, considered as a precious treasure to be preserved” (8a).

This app is the easiest way to pray the breviary. It gives you all the texts in order, so you don’t have to flip back and forth as you would with a printed breviary. If the text is too small, you can make it bigger. If you don’t understand the Latin, you can display a parallel English translation.

Those more familiar with the breviary, and especially priests, will be pleased to see we’ve included a selection of prayers and blessings in Latin, such as are normally found in the appendix of a breviary.

Breviarium Meum HD: for the iPad 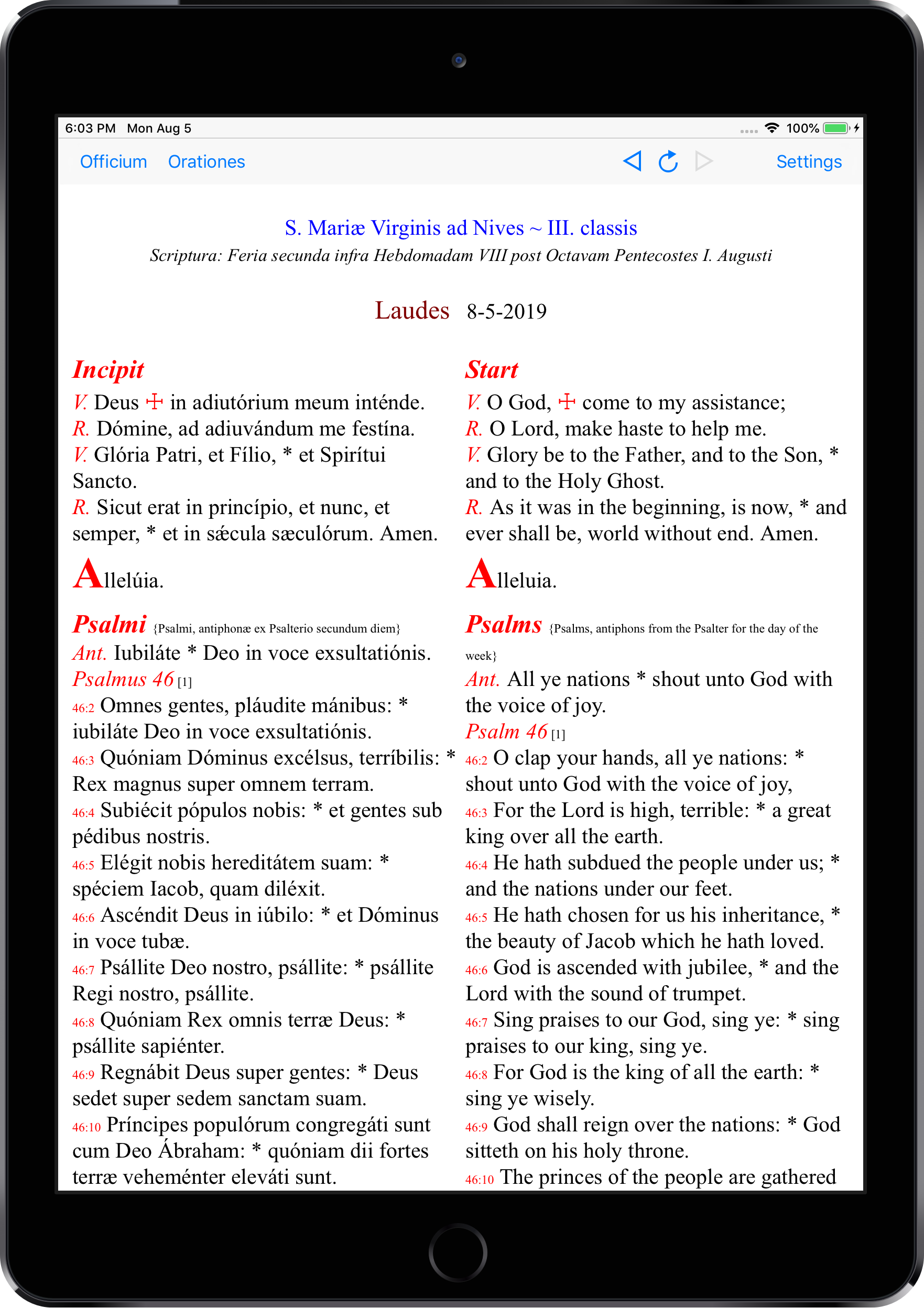 Breviarium Meum HD is the iPad version of Breviarium Meum. A separate app makes it easier for us to take advantage of special characteristics of the iPad. The most obvious of these is the larger display, ideal for viewing Latin and English side-by-side. We've also added forward and back buttons to navigate among the hours and prayers. If you accidentally load something, the back button will restore what you were previously viewing, so you won't lose your place.

The texts presented by the app are based on those prepared by the Divinum Officium Project, and in most cases, we follow the changes they make. Recent changes have given a different meaning to two of the choices in the app for rubrics, namely those currently (version 1.8) labeled “Pre-Trent Monastic” and “1960 rubrics with 2009 calendar.”

The Monastic option will be modeled on the 1963 Monastic breviary. Previously, it was a reconstruction of the pre-Trent office for the purpose of comparing it with other historical versions. This change will make it more useful for monks who pray the traditional Benedictine office today. It also means that there will be an actual printed edition to use as a model. Work on this is in progress.

For more information on the rubrical versions available, see the details on the Divinum Officium Project website.

New versions of the apps for iPhone and iPad are now available from the App Store. The main improvement is support for Dark Mode. The theme choice for the dark appearance is independent of the choice for the light appearance.

The new version adds partial Portuguese and Spanish translations of breviary and a newer Polish translation. The partial translations translate little more than the psalms at this point, but work continues. The appendix of orationes now includes the Litanies of the Holy Name, the Most Precious Blood, the Sacred Heart, and St. Joseph. The set of traditional litanies is now complete. The iPad version features a new start page that resembles the title page of a breviary.

A new option allows the use of the the Latin translation of the Psalms and Gospel canticles approved by Pius XII. The Latin is more classical, but less suitable for chanting. Pope Pius wisely decided to permit its use, but not require it. The 1961 editio typica was printed with this translation.

The most obvious change in the new release is themes for the display of breviary texts. Besides the parchment background that has always been available, you can now choose a solid light or dark background. The former gives the app more of a modern look, and the latter is useful for reading in a dark environment.

This release also features the addition of a new breviary translation, namely Polish. French will probably be the next addition.